The issue of coal shortage has once again been dominating the headlines in India. Despite many pro-coal reforms that India has taken in the past years, the issue of shortage does not seem to be getting resolved and has become a ritual event every year or every other year. Most of the time the coal crunch is eased through imports but in 2021 the country hit a perfect storm situation where extreme weather in India and disrupted coal supplies globally resulted in higher coal prices internationally. The coal power sector, caught between high international coal prices and short stocking of coal by power plants/supply of coal, went into crisis in the later part of September 2021 with many power plants operating with dwindling reserves.

Here we analyse the probable causes of the crisis using data from Central Electricity Authority (CEA) and Ministry of Coal (MoC). 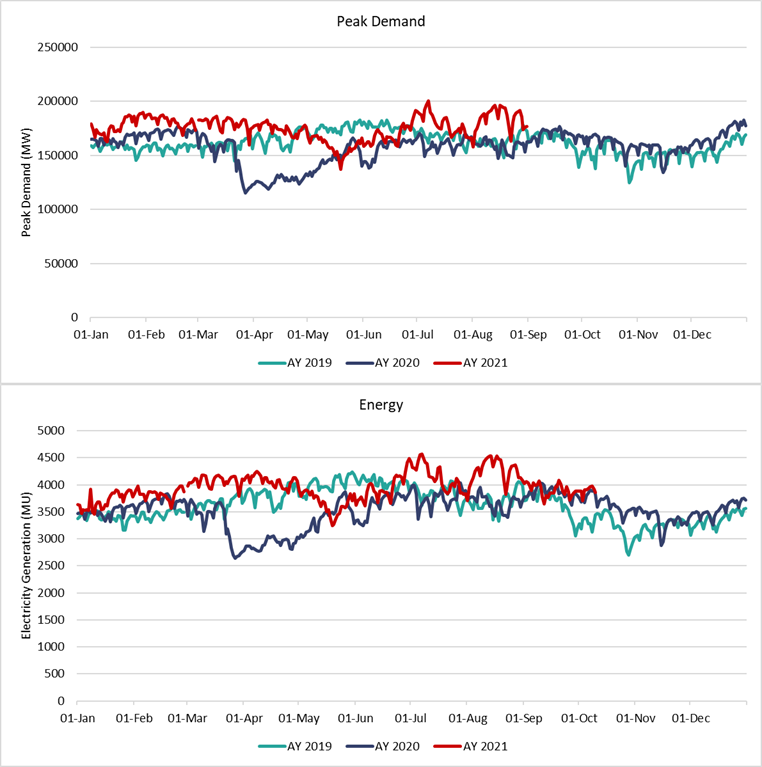 Peak demand and electrical energy demands were higher in 2021 compared to previous years. India’s highest-ever peak demand was on 7th July 2021 at 200.57 GW, which was also the day when maximum energy consumption was reached for any given day at 4568 MUs. The following month, August, also followed with a similar but lower peak both for peak energy demand and energy consumption at 196.2 GW and 4536 MUs, respectively. One could also observe that the demand curves dips through the winter months and starts to steadily pick up and reach peak in summer. 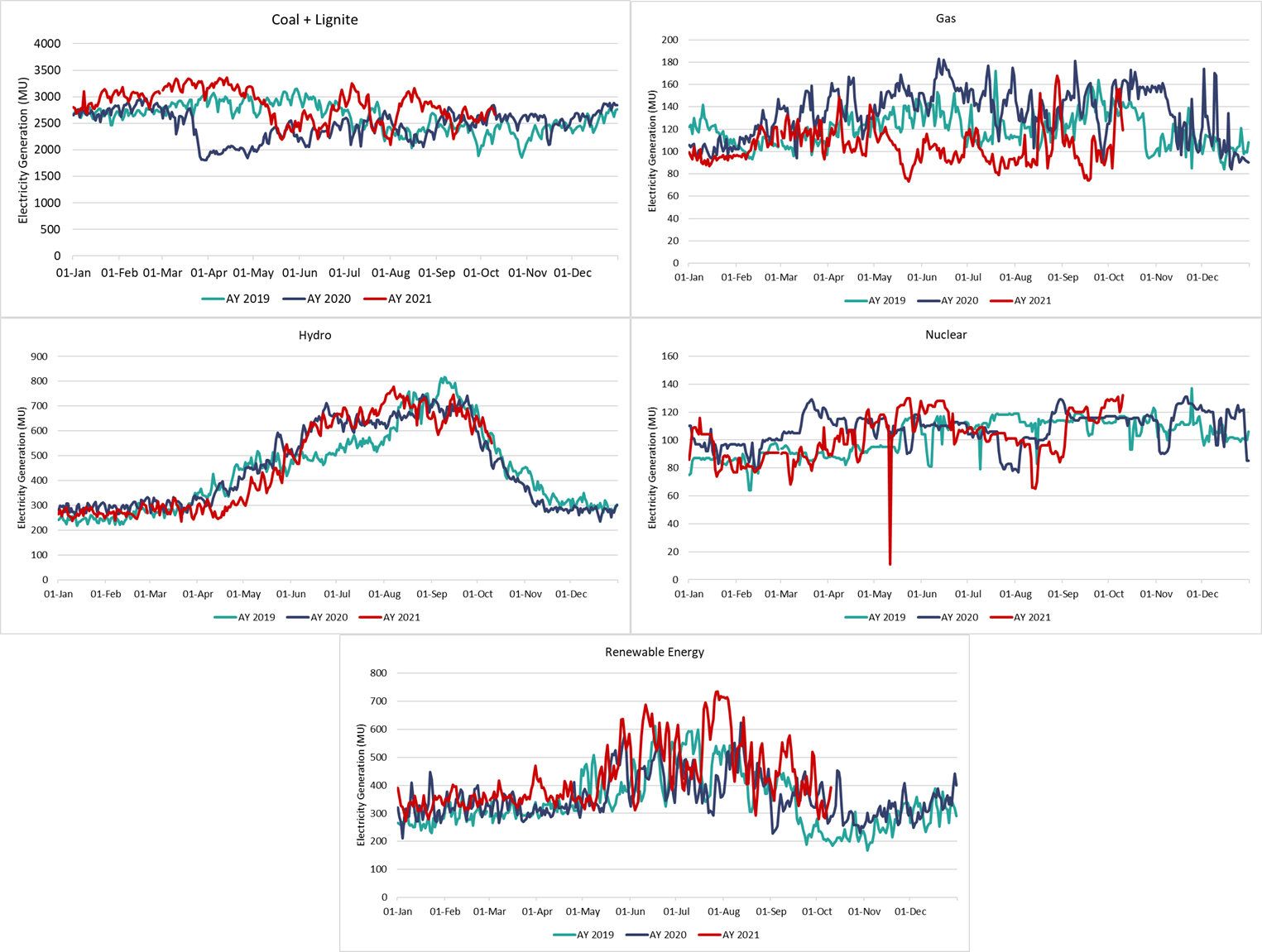 Despite the unprecedented demand for electricity in July and August 2021, contribution from coal plants remained lower thanks to higher generation from renewable and hydro sources. This to a large extent helped in meeting the demand and giving a breather to coal power plants.

Figure 3: Coal Stocks at Power Plants on the Last Day of Each Month Since January 2019 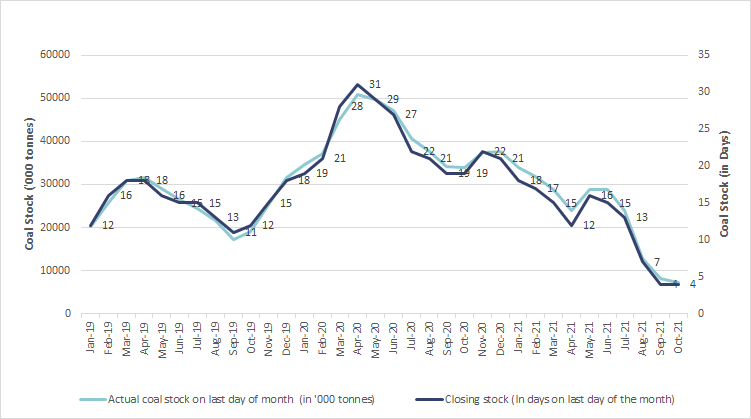 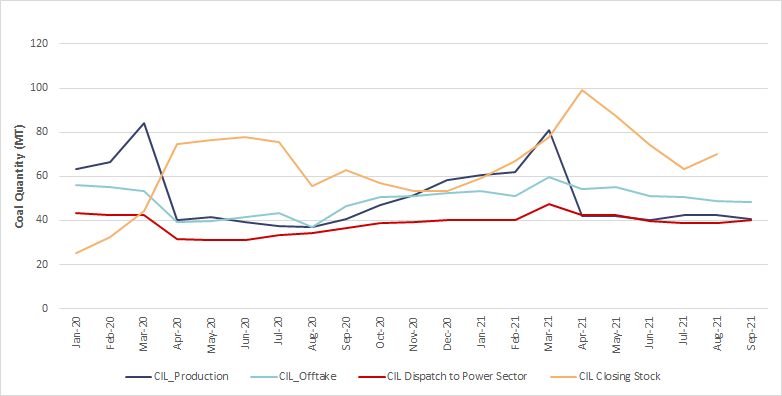 CIL’s production varies over different seasons and months and it usually produces maximum coal in March every year (financial year closing) leading to the build-up of good stocks by the country’s biggest miner.

The figure also shows that: 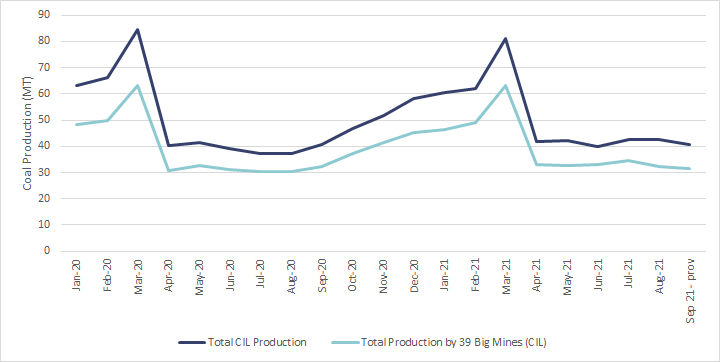 Figure 5 is a compilation of coal production data for 39 big mines under CIL compared to CIL’s overall production and indicates that:

According to CEA the reasons for the coal shortage at power plants on 7th October 2021 were as following:

In conclusion, it seems that coal power plants had ample time and indication since January 2021 on how demand would pick up. However, coal stock at the power plants seems to have depleted since September 2020. Given that there was consistent coal production going on in the country, they should have been in a position to offtake coal even before the start of the monsoon. Even though there was a slight increase in coal stock with power plants in May 2021, that proved to be far insufficient given the unprecedented demand the country saw in the months of July and August 2021. This raises a big question on the ability of power companies to understand and project demand in a reasonable manner. It is also very likely that coal plants were expecting another COVID wave in September – October 2021, i.e. reluctant to stock coal.

In addition, CIL might not have been able to organise additional railway rakes within a short time to increase its dispatch during the monsoon, but this needs further investigation.

In either case the crisis could have been avoided if there was reasonable prediction on demand and timely uptake of stock by the power companies. Contrary to popular narrative, this is not a coal crisis or installed coal power capacity crisis but a management crisis. New coal mines and power plants are unlikely to solve the issue, rather high quality power demand projection and strict monitoring of coal stock at power plants would avert such a crisis in the future.