The EU and the UK are banning the seaborne imports of crude oil from Russia on 5 December 2022, by far the biggest step to date to cut off the fossil fuel export revenue that is funding and enabling Russia’s barbaric invasion of Ukraine. 30% of the oil used in the EU came from Russia in 2021, and the EU bought more than 50% of Russia’s exports.

Russia is more dependent than ever on revenue from oil, as tax income from other sources has dropped due to the impact of sanctions on the economy, and revenue from gas exports has collapsed. The government is currently living off the huge windfall it made earlier this year from gas and oil exports to Europe, after prices jumped. Once that windfall is spent, in the next couple of months, further falls in revenue start to cut deep.

The EU has historically been the main buyer of Russian oil, and remained the largest buyer until November 2022. Before the ban took effect, the reluctance of European buyers had already driven a 20–30% discount on Russian oil. As oil prices fell in November and the discount held steady, the prices for Russian crude oil fell to $60–65 per barrel. Together with the strong ruble, they meant that the ruble-denominated price reached its lowest point since the 2020 COVID-19 shock.

Most of this price per barrel, about $50, ends up directly in Russian state coffers through the mineral extraction tax and export duty. The EU and G7 are also introducing a price cap mechanism that aims to push the price below $60, as a first step. This price level, if successfully enforced, will already force Russia to reduce the tax per barrel. To cut Russia’s tax revenue, lowering the cap quickly and progressively is essential.

Russia’s oil exports rebounded in November, as Germany and Italy went on a last-minute shopping spree

Russia’s oil export volumes and revenue increased from October to November, the first monthly increase since July. The main driver was exports to Europe, which increased for the first time since March, while remaining below the levels of November 2021.

The increase in exports to the EU was driven by Germany and Italy, which appear to have gone on a last-minute shopping spree before the oil import ban kicks in. Due to the increase in imports by these two countries, the EU remained the largest buyer of Russian oil in November, until the very last moment before the ban became effective. This underscores the importance of the EU ban. 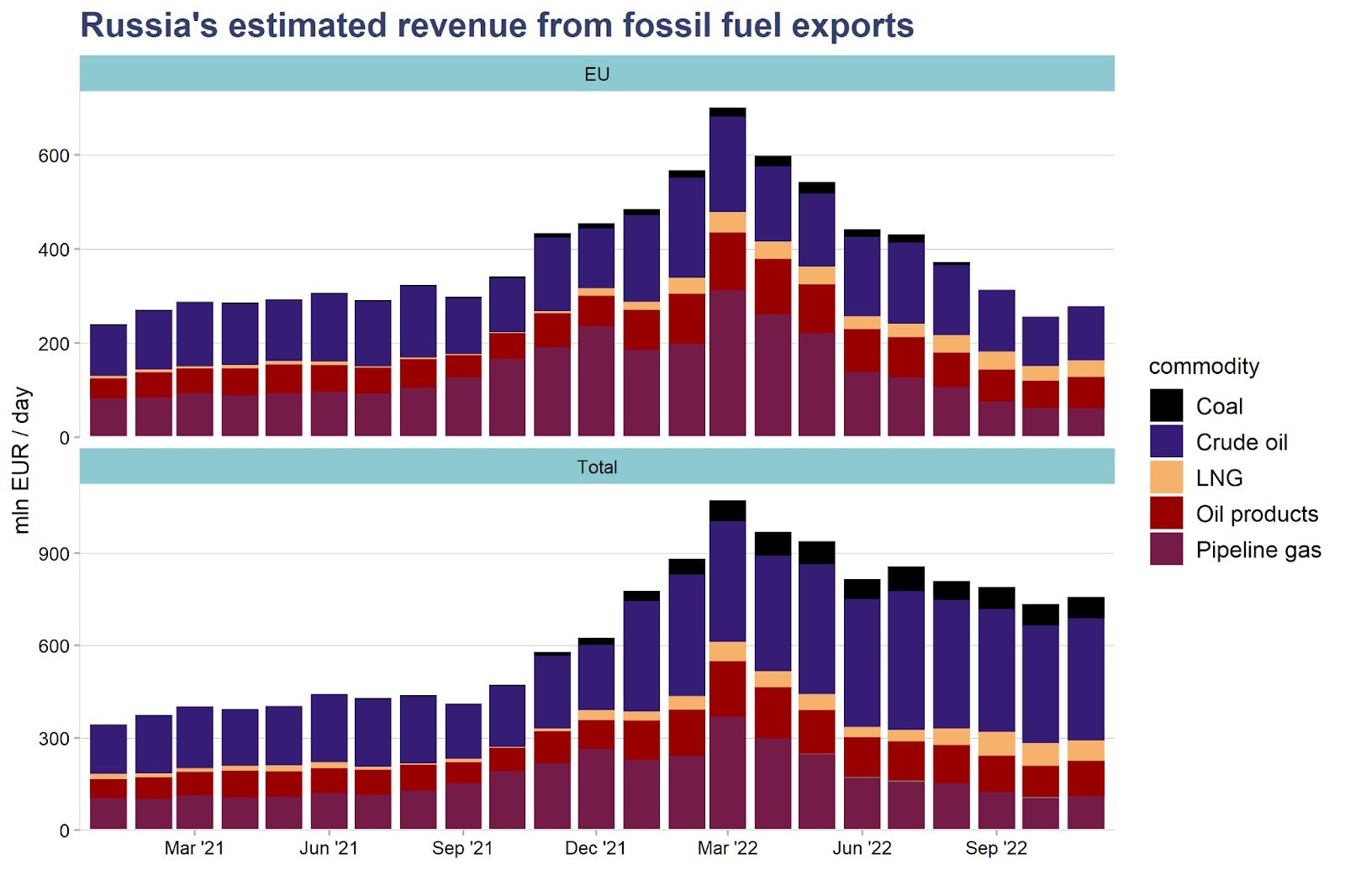 LNG exports fell for the first time since the start of the invasion, as EU gas storages filled up in October. Exports to China dropped as well.

Besides Germany and Italy, the list of countries that increased oil imports from Russia shows who is stepping up to fill the gap that will be left as the EU stops imports: China, India, United Arab Emirates, Turkey, Malaysia and Singapore took more oil from Russia in November than in October.

Despite the drop in prices, Russia made an estimated $18 billion exporting oil outside the EU and the UK in October–November, showing the need for a strong price cap on Russian oil to limit the country’s revenue. 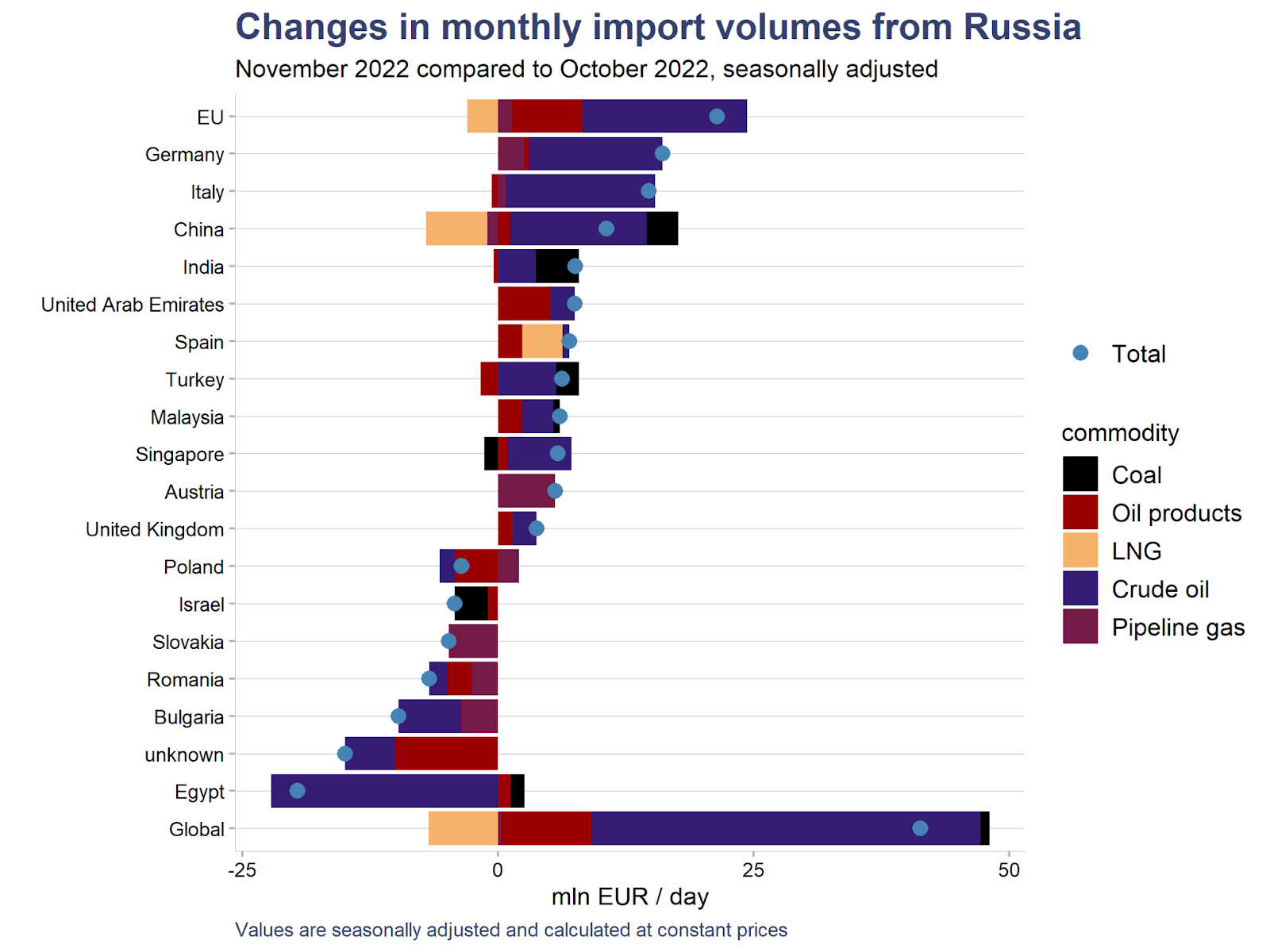 The price cap applies to tankers owned or insured in the EU, the UK, other G7 countries and Australia. To circumvent the price cap, Russian exporters would need to tap a lot of additional tanker capacity that is not covered by the policy. In November, the majority of Russian oil and oil products continued to be shipped using tankers with European ownership or insurance, showing that Russia has so far had little success in finding alternative shipping and insurance providers. This illustrates how strong a set of tools the price cap coalition has to force down Russia’s oil revenues by lowering the price cap. 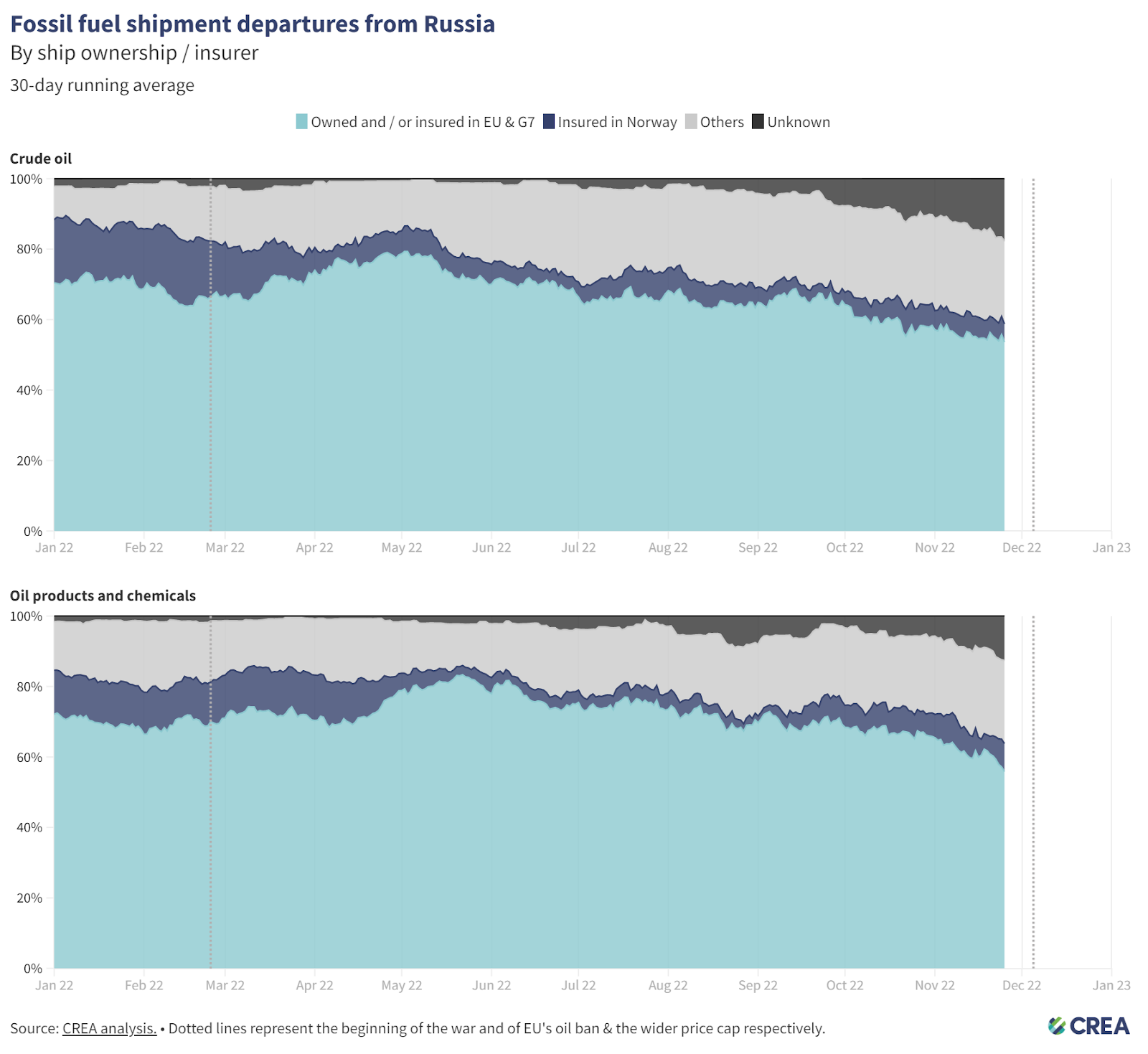 As the EU and UK finally stop importing Russian crude oil, the big question is how much of the demand Russia can replace by finding other buyers, and at what price. Persuading other buyers to take more will likely require increasing the discount that Russian sellers offer from international prices.

Ukraine’s allies are aiming to push down the price further by setting a price cap that applies on all Russian oil carried on tankers owned, insured or financed by companies in the EU and G7 countries, as well as other countries joining the coalition.

Russia made an estimated $18 billion on crude oil exports outside the EU and the UK in October-November alone. The oil import ban is likely to result in an increase in these exports, even if Russia’s revenues fall overall as a result of the ban. This is why a strong price cap is needed.

The essential next steps are:

Another area for action are LNG imports, on which there are still no restrictions/ Russia has stopped pipeline gas to Europe in an effort to weaponize energy supply, but European buyers were grabbing all the Russian LNG they could get until October when gas storage got so full they didn’t have anywhere to put it.

This article and the oil sanctions tracker are also available in Ukrainian.