The media reporting on the imports of fossil fuels from Russia has a “China and India” problem. The vast majority of the headlines around the issue focus on these two countries, creating a lopsided impression of who is filling Russia’s coffers. CREA analysis estimates that despite cutbacks, EU, NATO and G7 countries bought 60% of the fossil fuels exported by Russia in June, down from around 75% until March but still eclipsing China (25%) and especially India (4%).

Russia’s fossil fuel shipment volumes continued to shrink in June, extending and accelerating the trend we reported for May. Russia’s estimated revenue in June was EUR 22.5 bln, down 16% from May and 25% from the peak in March. The EU ban on new oil and coal contracts is having a significant impact, even if full import bans only kick in in August for coal and in December for oil. Fossil gas imports from Russia into Europe have fallen sharply, mainly due to Gazprom’s decisions to renege on contracts and cut back on supply.

Despite widespread public attention on imports by China and India, Ukraine’s allies in the EU, NATO and G7 continue to import the majority of Russia’s fossil fuels. The EU’s share of this fell to 51% in June, down from more than 60% still in April. The largest importers among EU&NATO members were Germany, the Netherlands, Turkey and Italy. 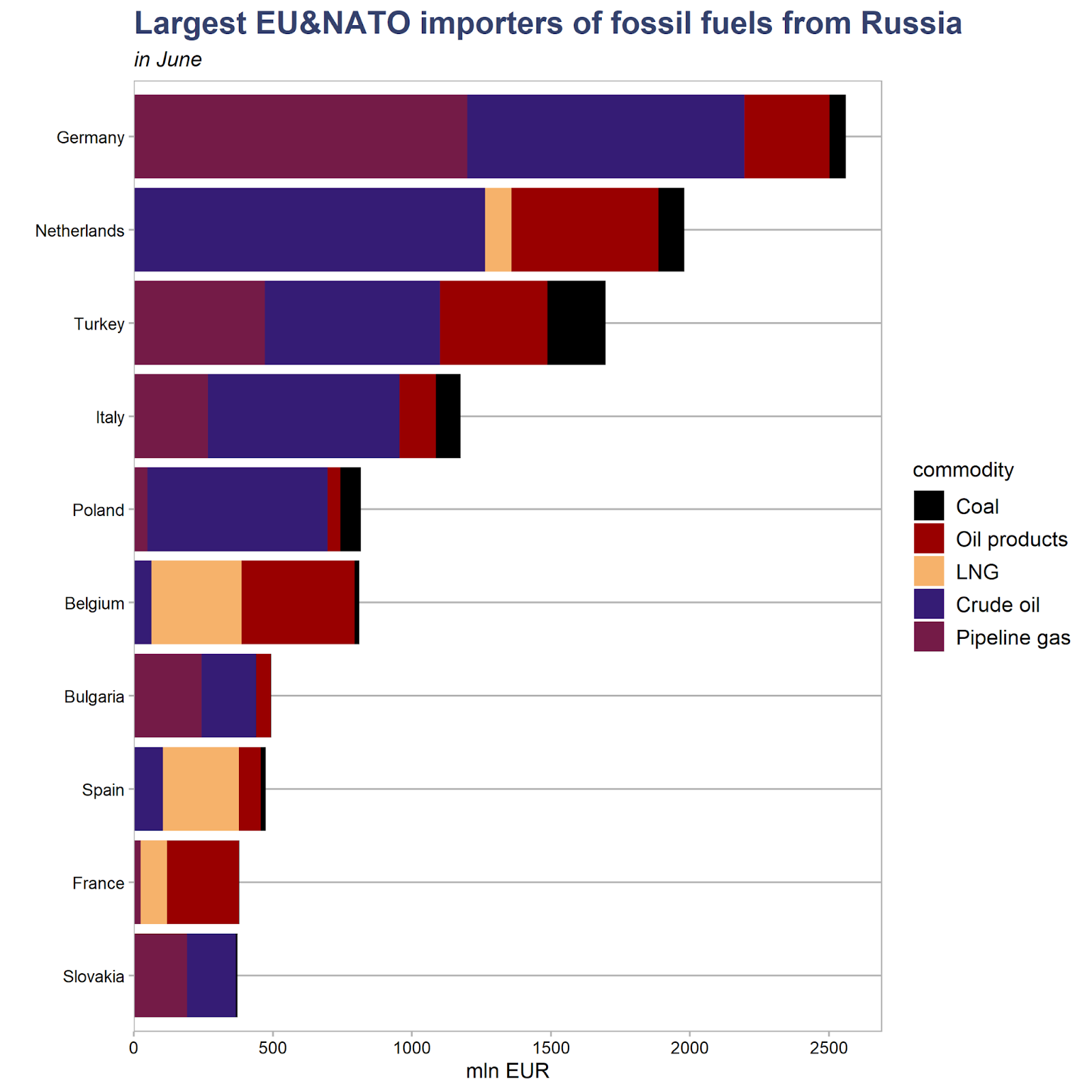 Attention on the increases in China’s and India’s imports is explained, at least in part, by the novelty and controversy around new trade flows. Whatever the reason, the focus does give a lopsided impression of the role of different importers, and can lead people to underestimate the impact that upcoming EU bans will have. It can also mask the importance of further action by Ukraine’s professed allies at EU, NATO and G7.

China’s imports have continued to increase, but India’s import volumes in fact fell from May to June, while remaining far above pre-invasion levels. China is currently buying essentially everything that Russia can deliver through pipelines and through its Pacific ports, so substantial further increases in imports would require either very long and costly shipments from Russia’s Baltic Sea and Black Sea, or new infrastructure that would take years to build.

Some reports attributed the fall in Russia’s oil shipments in June to technical problems at the Primorsk port. However, the shipments out of nearby Ust-Luga and St. Petersburg ports fell as well, pointing to weak demand as a more fundamental cause. Shipments out of the Novorossiysk port on the Black Sea fell almost as much as from Primorsk.

To provide a near-real time view of fossil fuel imports from Russia, CREA has launched a new website: https://www.russiafossiltracker.com/, which also includes the documentation of the methodology and sources for our data and analysis.